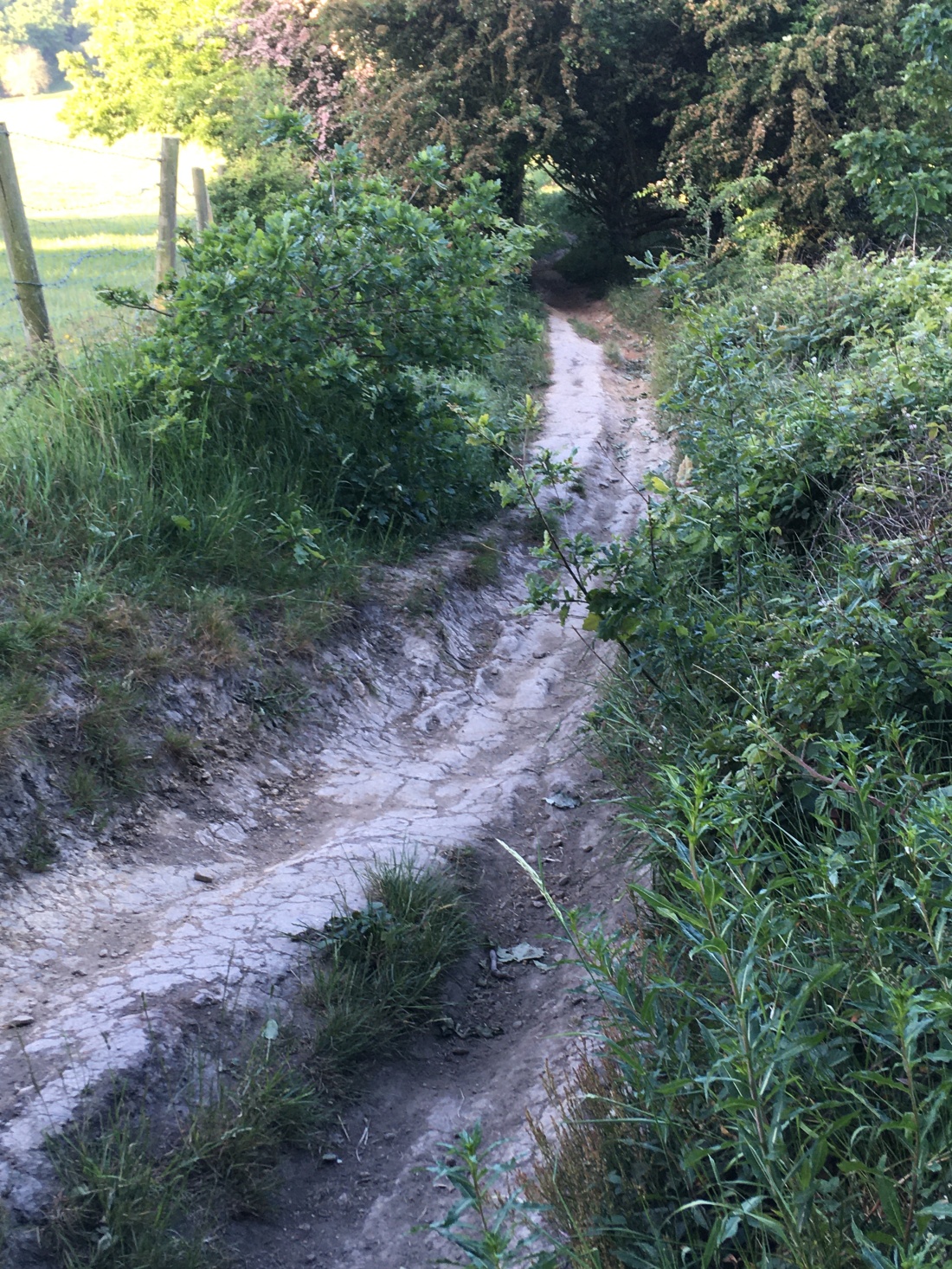 Amidst the chaos and turmoil that has been and continues to be our pandemic experience, stories of who we are, our strength of mind and inner character present themselves across our preferred media outlets. We see examples of determination run free across the open spaces, connected networks and shared narratives of the World Wide Web. Indeed, among it all I too have been drawn in to the new norm, and as a result, jump to engage in the next Zoom or Skype call, an MS Teams clinic, and whatever is on offer in an attempt to develop self. In short, this new time and space we have been granted has allowed us to construct professional networks and to pursue visions of the effective coach-self, the very self I have waxed lyrically over in the months prior to the pandemic world and in my own corner of the web. However, I now wish to pause and consider the value of these experiences and to question exactly what it is I have gained from the new order.

The associated research literature tells us that coaches develop through a blend of informal, formal and non-formal means, and that central to this brocolage of learning is the lived experience of the practicing coach. We may wish to frame this as workplace affordance, a concept that provides us with access and opportunity to career development through our observations and experiences as a practicing coach. Indeed, much of my own research reflects this form of learning and a personal desire from each of my research participants to engage in observations and conversations as a way to clarify their understanding of the coaching process. Our latest non-formal endeavour promotes the use of social media as a way to connect with the lived experiences of others and to build meaning from their stories. Certainly, within the personal narratives we can find creativity, passion and a willingness to share what they do and why they do it. The question is, can we find learning within the experiences of others, and if so, how do we transfer this new knowledge to our own practice environment?

Non-formal learning has been situated as a prominent form of coach development, a means of advancement that has been reported to hold the most value to the practice  of the sports coach. It comes in various shapes and sizes and is often described as a clinic, seminar or webinar. This mode of development reflects the collective needs and wants of the targeted subgroup and provides opportunities for each member to interpret information through their own contextual lens. Thus, the process of learning rest with the individual and the subsequent interpretation and conceptualisation of their working knowledge. This personal agency is what moves the coach-self to engage with the lived experience of others and to successfully dissect the narrative in order to inform and shape their own practice.

Returning to our new order and the emergent provision of ‘Question & Answer’ sessions via a Zoom call, can we say with a degree of confidence that this organised and semi-systematic approach to a ‘coach conversation’ has helped to develop our coach-self? Certainly, I believe it fair and just to describe the content of the provision as a form of proximal guidance, identifying what is and isn’t known. In fact, interaction with various master coaches from around the world has been situated as a valuable means of coach development. With this in mind, I would like to position the experience as a valuable contribution to my professional development and would encourage the UK basketball coach community to pause and reflect on the musings of the knowledgeable others. In doing so, the coach-self can begin to interpret the many messages shared within the conversations and begin to construct meaning that is both personal and important to them and their context. For example, the notes I have made throughout the lockdown include consideration of communication, what I do resonating with my athletes, being curious in all that I do, and the importance of planning. The next stage for my development as a coach is to interpret these messages and frame them within my own context, something I employ us all to do. 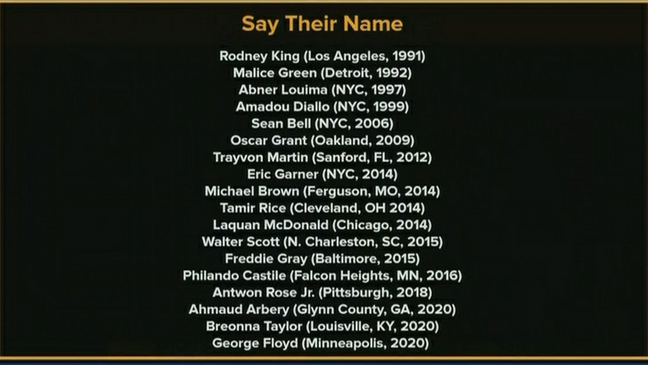 The following ideas, thinking and practices emerged as a result of an ‘Honest and open conversation about racism’. Coach A (white male) engaged in a conversation with Coach B (black male) in an attempt to elicit the lived experience of being black in the United Kingdom. The idea was conceived out of a willingness to have an uncomfortable conversation as a way of developing cultural competence. In fact, it is true that in order to address anti-black issues we must recognise their existence in a multitude of spaces, and that these spaces contribute to structural racism.

The conversation began with Coach B sharing his personal experiences at the hands of the Police, education and sport, all considered to be social structures entrenched in battles for equality. During the conversation, terms such as ‘whiteness’, ‘institutional racism’,  ‘structural racism’, ‘prejudice’ and ‘civil rights’ were discussed, and Coach B shared his understanding of these terms. It should be noted that Coach B believes that in order to be effective in our practice, each and every coach should understand the definition and delivery of each of these terms.

What a coach can do to be effective:

Coloured – Racial slur, ethnic descriptor employed in South Africa to describe non-whites
Half-Caste – Impure, unequal, cast-off
Nigger – originally denoted black people, the word was used to oppress and segregate people. The word has been described as the most ‘loaded and troublesome’ word in the English language 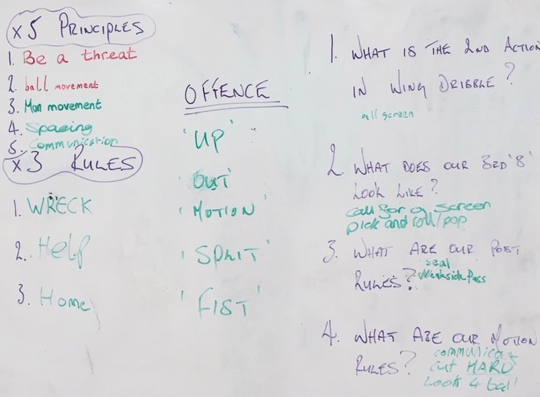 My planning revolves around four quarters, each being a blend of micro, meso and macro consideration, and as such, focused on individual, team and tactical markers. For example, our first quarter focus breaks down individual roles in both advantage and disadvantage situations, and at both ends of the floor. I tend to keep it simple, three defensive rules and five offensive principles as a means of guiding everything we do, and I do mean everything. I believe that having consistent cues, language that offers us all a frame of reference keeps the messaging consistent and supports the production of congruous performance in each Moment of the Game.

Today’s game represented the end of quarter one, a quarter where we had attempted to develop an understanding of our three and five philosophy, our identity and the individual roles assigned to each Moment of the Game, and agreed at the beginning of the season. I don’t believe that these eight areas of focus are in any way ground breaking or indeed innovative. In fact, I am guessing that colleagues would refer to them as ‘bread & butter’, the stable elements of invasion sport. However, I have stuck to these ideas throughout my coaching, and, at one point, I actually placed them within a framework. I referred to this as our ‘System of Life’ (SoL).  I felt that each element of the framework could equally serve to guide us through any situation. For example, I spoke of spatial awareness (spacing), understanding where you were in any given moment, your shape, movement and the movement pattern required in response to the situation. For me, spacing requires the development of body, time and movement awareness, agility and execution throughout the moment and in line with the individual role.

On my drive over to the venue today, I reflected on our 1st quarter success, on our SoL and our practice sessions over the past five day’s. I entered the arena comfortable that the boys had been working hard, that they wanted to improve, and that we had achieved some mileage within our 1st quarter journey. Unfortunately for me, none of what I had contemplated offered any degree of personal reassurance, I felt somewhat out of sorts, a personal matter had been plaguing me all week and it was now leaning on me. I attempted to move the thought to a side, however, I was pretty sure that it wasn’t suddenly going to just go away.

I sat down in front of the players and delivered my 45 second pre-game address. I had spent the hour prior to the game sorting out video capture and had not had the chance to really converse with the players. I will say though, I am not sure just how important it is to deliver any direction or offer a motivational sound bite to take them into the game. I had however planned on talking about our distance travelled, what we had accomplished to this point and where we wanted to go next. The truth of the matter was simple, I wasn’t going to get much more than 45 seconds so my message was uncomplicated, “discard the mistakes and move on!” We had scouted pretty well, the video had told us what we needed to do and our Friday practice had allowed us to go through our individual roles. So, ‘discard the mistakes’ was to be our game mantra, our approach for the next forty minutes and who we sought to be.

As we lined up for the tip I asked our jumper, “where is it going?” “Where is the ball going?” I got no reply. I then said, “number 13, your ball” – having looked at the player positioning on the floor, I was confident that we could win the tip and that our number 13 was the open man. I was wrong, we won the tip but it went straight to the opposition. Was my questioning wrong? Should I have been more directive and instructional? I thought the ‘play’ was obvious, the advantage clear. I then questioned myself, had I coached that moment? Was it something we had covered in our practice? It was both a micro and meso element, yet I was confident that I had not overtly discussed our positioning and approach to the jump ball situation. Why not? We lost the quarter 11-10 but went on to win the game 83-52…perhaps there is a message yet to be uncovered here about my planning and my practice!